I really loved my time in Southern Mexico. I look forward to going back.

The people are just so kind and happy. In fact this is true throughout Mexico and Central America. I had read and heard so much hype about all the dangers from drug cartels and kidnappers, but found none of that.

I felt as safe there as anywhere I traveled so far and safer than several places I’ve been to in the USA.

I got to Oaxaca late because of the bus issues. At the station stood my new Couch Surfing host and his two other surfers. They were all smiles and I was so touched they came to get me and make sure I got back to the house safely.

My host, Christopher, is 18 and lives with his wonderful parents. 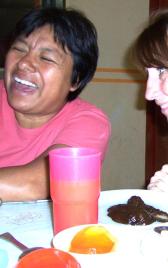 They Welcomed me with open arms. His dad had been a taxi driver in San Francisco where Christopher had been born. Now he owns and drives what the call a TukTuk.

He spoke some English. But the mom did not. So we smiled a lot and nodded a lot and I said Si, Si, Si a lot (actually that was my mantra through all of my travels south of San Diego). 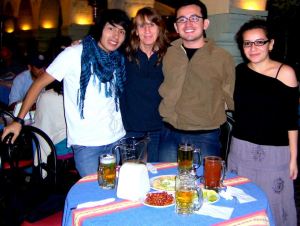 We spent a bunch of time in the town square drinking Micheladas (Mexican slang for “my little cold one”). This is one of my new favorite drinks and have made it several times since coming back to the States… http://en.wikipedia.org/wiki/Michelada

1-2 dashes of your favorite hot sauce

2. Fill mug with ice (yes, ice in a beer is popular in Mexico and other parts of Latin America).

4. Slowly pour in beer. The salt on the rim will cause the beer to foam up, so be careful while adding beer.

One night all of the Couchsurfers and our host, Christopher, went to see a wonderful outdoor concert. It seemed so magical as the stage was set between two ancient churches on the plaza. The lights came down from the towers and the moon shone so bright.

Even though I cannot speak Spanish like they do south of Mexico City I could follow the beautiful story of Oaxaca that she sang about http://www.susanaharp.com/2010/ . It was a real treat.

I did have a hard time with all the street sellers. On the buses, at the square, on the street, in the bano. There seems to be no where they will not walk up to you and it is hard to get them to leave. Even if you aren’t interested. They exploit children too and this made me very sad.

Oaxaca is a cosmopolitan place. European influenced for sure.

I love Oaxaca and will be back for sure…

This site uses Akismet to reduce spam. Learn how your comment data is processed.