I did a lot of exploring and traveling by bus while I was in Mexico and Central America. I was told that the commuter buses in Mexico are some of the best in the world and that proved to be true. And they go everywhere. There does not seem to be anywhere in the country where they don’t go.

These buses are so economical and they run on time and arrive on time. You can do all your buying online, go a day ahead to the station and purchase there or wait till your travel time and hope there is a seat left. There are several that are luxury (I did not travel on any of these), but all have extremely comfortable seats that recline -and seats can be reserved where you want to sit, air-conditioning, ample storage space and movies showing on several screens throughout the bus.

So with all this in mind I was still a bit nervous to get on my first bus ride in Mexico.

I was leaving Mexico City on my way south to Oaxaca. I decided to go the day before to the bus depot and buy my ticket so I would feel more confident about it. The station was amazing and very modern. With all the bus companies represented, there are various companies going to different regions of MX, and looking very much like a shopping mall with a great food court. Cool.

I bought my ticket for the next day for $8 from Mexico City to Oaxaca. I was much more confident, but still had the rumors of Bandito robberies and kidnappings playing in my head.Luckily unfounded. BUT since I had these thoughts, I had a rude awakening when about an hour into the ride there was a ear-splitting blast at the rear of the bus.

I was sitting behind the driver at the window with a tiny, much older, non-English speaking Senora to my right. Across the aisle from us was a couple I had began talking to at the station who are from the USA and live several months of the year in Oaxaca so they had done this trip many many times and had told me my fears were very unfounded. I am embarrassed to say that I did not handle myself with any dignity at all! I literally threw myself over the old woman next to me. NOT to protect her, but to be able to run away faster. SO pathetic LOL.

After the blast the driver swerved to what should be a shoulder, but wasn’t. The bus was mostly up against the side of a mountain with the rear still on the hwy. The driver told us to stay in the bus, but he was smart enough to get out and stand on the small strip of grass/dirt by the mountain. Of course no one listened and all decided it was safer to stand outside the bus and not in seats still on the hwy.

It appeared that something had hit the bus from another vehicle or the mountain. All the rear windows were a broken mess.

No Banditos, but definitely a heart stopper. 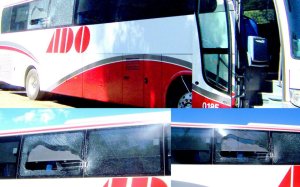