When I first came to San Luis Obispo I had only planned on staying for about five weeks. Five weeks turned into almost three months. By far the funnest thing I’ve done while I was here is working at The Little Theater. A community theater in the heart of downtown.

I emailed Jessi, the volunteer coordinator, and met with her a day or so later at the theater to talk about what they needed in way of a volunteer.

A few days later I got an email saying that they needed some painting and building. I was excited. I showed up the next morning and have made the theater my home for the last 6 weeks or so. LOVE IT!!!!

The play was the Fantasticks. I worked on the two large trees, the Fantastic sign, and spent one very late night painting the floor. My boss, mentor and new friend, Dave, was so much fun to be around. As were the cast and crew. I have laughed and been myself and learned so much. YEAHHHHHHHHHHHHHHHHH…. 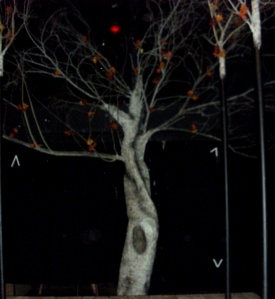 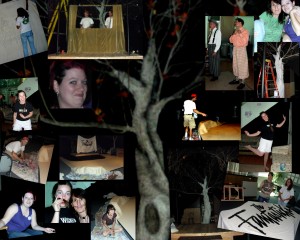 Opening night some from the show stayed after and were treated to story time from one of the actors, Larry Kaml, who worked at Disneyland on the Jungle Cruise for 11 years. Great stories!

On closing night I stayed in the Green Room during the performance so I could hang out with everyone when they weren’t on stage. It was a bittersweet night. After that performance we did what they call Strike. The cast and crew tear down the set. I was a bit sad for sure. 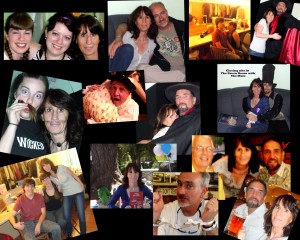 Before doing the set work for the next play, Leading Ladies, I helped with WOW (Week of Welcome) . This is a program at Cal Poly for their incoming freshman class. They work under upper classmen in the community as volunteers. Four groups of 15 working at two-hour intervals. The kids were great. We painted and cleaned and laughed. 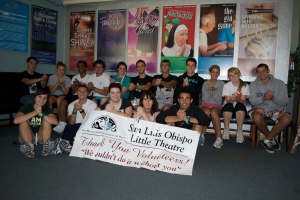 Between productions they do one night Reader’s Theater plays.  This one was called Side Man and was so poignant. Its about the downside of jazz in the 50s thru the mid 80s. The actors sit on stools and read the play. Great fun.

And I love the director, John Battalino. He has such a great gentle spirit. The above pictures were of that night. The cast party was last night. I can not express how much fun I had!!! And here are those pictures.

Started this past weekend doing the next set. Leading Ladies. This time I am using power tools!!!!!!!!!! Go me. I only have a few more days in SLO. Great way to end a fun time on my journey…